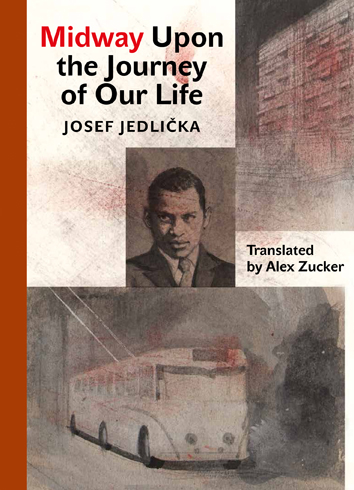 Midway Upon the Journey of Our Life

Written between 1954 and 1957 and treating events from the Stalinist era of Czechoslovakia’s postwar Communist regime, Midway Upon the Journey of Our Life flew in the face of the reigning aesthetic of socialist realism, an antiheroic novel informed by the literary theory of Viktor Shklovsky and constructed from episodes and lyrical sketches of the author and his neighbors’ everyday life in industrial north Bohemia, set against a backdrop of historical and cultural upheaval. Meditative and speculative reflections here alternate and overlap with fragmentary accounts of Josef Jedlicka’s own biography and slices of the lives of people around him, typically rendered as overheard conversations.
The narrative passages range in chronology from May 1945 to the early 1950s, with sporadic leaps through time as the characters go about the business of “building a new society” and the mythology that goes with it. Due to its critical view of socialist society, Midway remained unpublished until 1966 when it emerged amid the easing of cultural control, but a complete version of this darkly comic novel did not appear in Czech until 1994.

A novella written by a former RFE/RL Czechoslovak Service culture editor is now available in English, and gaining overdue recognition as a key work in the Czech literary cannon.

The scarred terrain of postwar northern Bohemia is the setting of Midway Upon The Journey Of Our Life, a novella by former RFE/RL Czechoslovak Service Culture Editor Josef Jedlicka (1927-1990) that was published in English for the first time earlier this year.

Written between 1954 and 1957 and never published uncensored and in full until after the fall of communism, most of the non-linear narrative takes place in and around the Collective House, a colossal apartment block for 1,500 people built by the Czechoslovak communist regime in the northern Bohemian city of Litvinov. It was envisioned as a paragon of socialist communal living in which cooking, cleaning, and child-rearing were to be shared by the employees of the nearby Stalin chemical plant. But the characters who populate Jedlicka’s Collective House are suspicious of one another, envious, and violent. Human nature fails to live up to the collectivist ideal, and its darker side is more pronounced for trying.

The landscape is as much a victim of the unrelenting push toward progress as are the characters. Jedlicka describes the destruction of the environment wrought by the zealous construction brigades so soon after the war as profane.

“Long before they took us prisoner in these model family homes, there was nothing beyond this but fallow land, pitted with bomb craters…” he writes, later continuing “The dead, who perished in inadequate shelters, were covered over the next day with a combination of rubble and earth, and the rebuilding of the monstrous chemical facilities began atop the ruins, a frenzied tangle of assemblages and conduits, almost as if to represent the dying’s final spasms.”

These brutal scenes are described throughout the novella in a lyrical, poetic style that is at once beautiful and disorienting. The story is semi-autobiographical (Jedlicka lived in northern Bohemia when he wrote the novella, having moved there from Prague after he was expelled from university for leaving the Communist Party), and the narrator regularly diverts from the story to express remorse at his naivety as a young, idealistic communist. The story jumps back and forth between the narrator’s student days in Prague before the February 1948 coup, when he and his comrades were full of optimism and “dreamed up our destiny in a self-destructive messianic dream of a worker’s tomorrow,” and the bleak reality he lives after that dream’s realization.

The motif is typical of other Czech texts of disillusionment from authors like Milan Kundera who are better known to international readers, but Jedlicka was among the first in the genre.

“Since the fall of Communism and Jedlicka’s death, Midway Upon The Journey Of Our Life has belatedly come to be recognized in the Czech Republic as one of the most original and important works in Czech literature since 1945,” wrote University of Bristol Czech literature professor Rajendra Chitnis in the book’s afterward.

While this work was late to be published and recognized, Jedlicka was by no means obscure to Czech audiences. After the Soviet occupation of Czechoslovakia in 1968, he immigrated to West Germany, where he worked as a culture editor and commentator for RFE/RL’s Czechoslovak Service. In his radio broadcasts he read essays on literature and reviewed exile journals and samizdat texts smuggled out of Czechoslovakia. Established at the beginning of the Cold War to transmit uncensored news and information behind the Iron Curtain, Radio Free Europe, as it was then known, also became a platform for artistic voices like Jedlicka’s that were suppressed inside their countries.

“There are not many works in the canon of Czech literature from the 1950s that manage to portray the period with such authenticity and credibility,” Czech Radio literary critic and reviewer Milena Maresova told RFE/RL. “He doesn’t blame, he doesn’t moralize, and he doesn’t judge. Quite the opposite…Jedlicka managed to capture the psychology and emotions of the time, everything that was repressed by a deaf and mute ideology that reduced human experience to mere slogans and political proclamations.”

Midway Upon The Journey Of Our Life was translated into English by PEN Writing in Translation Award winner Alex Zucker and was published by Charles University Karolinum Press as part of its Modern Czech Classics series.

Czech Fiction
One of the outstanding works of 1950s Czech literature, Josef Jedlička's Midway Upon the Journey of Our Life is a book of and out of its time: an expression of disillusionment with the oppressive Stalinism of Czechoslovak Communism, it was first published in a censored version in 1966, and only appeared in full in 1994, after Jedlička's death and the fall of the Communist regime. This excellent translation by Alex Zucker, elegantly published by Karolinum Press, is its first into English.
The setting is the Collective House in Litvínov in the industrial north-west of Bohemia. The utopian promise of a new social order offered by the building, whose construction coincided with the Communist takeover of Czechoslovakia in 1948, contrasts with the pessimism of the first-person narrator. Jedlička brings two senses of the avant-garde into opposition: on the one hand, architectural modularity and symmetry; on the other, the experimental, playful, digressive modes of literary modernism. The political situation becomes a problem of form, as the idealistic socialism of interwar art movements like Surrealism (of which Prague, after Paris, was the second capital) and Czech poetism finds itself stifled by suspicion of obscurity and individuality.
The form of Midway Upon the Journey of Our Life itself becomes an act of resistance, and dominates over plot or character. Jedlička repeatedly invokes Viktor Shklovsky and the Formalist distinction between fabula (the raw consecutive material of a narrative) and sjužet (its organization in the telling). Jedlička's titular gesture to Dante signals not only the infernal environment of industrial north Bohemia in the 1950s, but also the difficulty of finding a way to begin. Fabula disappears as sjužet - the struggle to find an apt form in a period which insists on socialist realism and utopianism becomes the only story. Jedlička at once yearns for and repudiates the pastoral and the lyric, in a critique both literary and ecological: the landscape of north-west Bohemia was and is ravaged by industrialization and chemical contamination. Germs of hope are glimpsed in the persistence of organic unpredictability among the chemical sumps, and of spontaneity amid the planned, the public and the uniform. Jedlička's interrogation of the complicity of political, architectural and literary structure makes this work important not only as a document of a neglected period of Czech literature, but as a stimulating piece of formal invention.


Josef Jedlička (1927-1990) was a Czech essayist and novelist, who after emigrating in 1968 worked for Radio Free Europe in Munich. He observed at first hand the catastrophe of the Stalinist industrial transformation of Czech society. This book’s Dantean title clearly signals the ‘hellish’ nature of the new environment, with the modernist Collective House (Kollektivní Dům) in Litvínov at its centre. Composed between 1954 and 1957, the novel was published in Czechoslovakia only after censorship relaxations at the time of the Prague Spring (even then with significant cuts). A freewheeling first-person narrative in which the ‘present’ time of the 1950s loops back to 1948 and earlier, Midway Upon the Journey of Our Life constitutes a dark, bitter and unrelenting assault on the Stalinist project, its human cost and particularly the intellectual self-deception which sustained it. While thematically anticipating later Czech ‘texts of disillusion’, Jedlička’s original writing style deliberately confronts the Soviet 1920s ‘literature of fact’ of the 1920s (here parodied as the ‘poetics of a policeman’) with elements derived from Czech Poetism and Surrealism. Alex Zucker’s excellent translation captures all of this, while Rajendra Chitnis provides a useful afterword.
Despite the lack of notes to clarify some of the frequent and sometimes obscure cultural references, this is nevertheless a valuable addition to the catalogue of modernist Czech writing in translation.