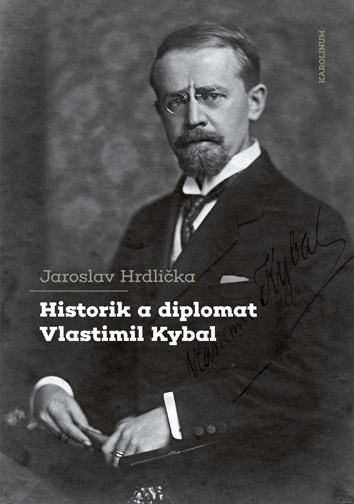 Vlastimil Kybal (1880–1958), a professor at the Faculty of Arts, Charles University; a Czech historian, a student of Jaroslav Goll, Václav Novotný, Josef Pekař, Josef Šusta, Tomáš G. Masaryk, and František Drtina; and a Czechoslovak diplomat, is the protagonist of this extensive and particularly detailed monograph. He focused on the history of the Middle Ages and modern age. He was awarded a doctorate in philosophy for his work on the Doctrine of Master Matthew of Janov. In 1906 he studied at universities in Paris and Bonn. Between 1907–1914, he undertook many research trips to archives in England, Denmark, France, Germany, Italy and Spain. In 1911, he was awarded a private associate professorship, in 1918 he became an extraordinary professor at Charles University and in 1919 a regular professor of Charles University. Between 1920–1939, he worked in the Czechoslovak diplomatic services in Italy, Brazil, Argentina, Spain and Mexico, where he met his wife, Mexican painter Ana Sáenz y Aquilar. Vlastimil Kybal spent World War II and the subsequent years in exile. He taught at many American colleges and universities.