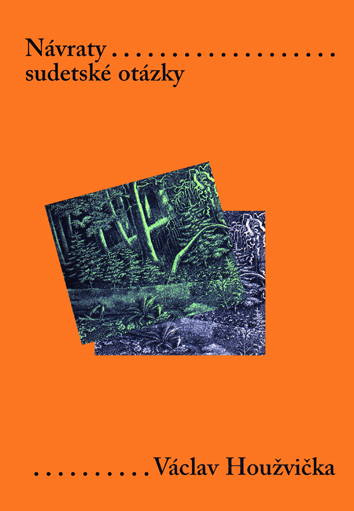 [Returns of the Sudetes Question]

Václav Houžvička describes the development of the Czech-German national controversies from the mid-19th century, through the establishing of the Czechoslovak Republic in 1918, to the beginning of the 21st century. He focuses mainly on the tragic end of the nations' coexistence in 1938-1945 and the following development of different Czech and German reflections on the reasons for the removal of Germans from the Czechoslovak Republic after 1945 in the latter part of the 20th century. A detailed explanation of Czech, German and Sudeten-German concepts is rendered in detail and coherently within the international and social-economic context of the 20th century.

Digesting the waffle
Review of a Czech study by Martin D. Brown
The subject of Czech-German relations has recently turned to waffle. Towards the end of last year, the Czech Republic applied to the European Union (EU) for the Karlovarské oplatky (Karlovy Vary, or Carlsbad, wafers) to be granted Protective Designation of Origin (PDO) status. If this request is approved, only wafers produced in western Bohemia will be designated as being truly authentic (or echt) and thus allowed to carry the name. This seemingly innocuous morsel of information has triggered another minor skirmish in the long-run-ning debate over the "expulsion" or "transfer" of the Sudeten German minority from Czechoslovakia after the Second World War.
Bernd Posselt, a Member of the European Parliament (MEP) and leader of the Sudeten German Landsmannschaft, has claimed that the original oplatky recipe was devised by Germans living in and around Carlsbad, who were later deported to Germany. Posselt is backing a protest by Bavarian wafer makers who argue that, given thesc events, thcy should be exempted from the terms of any future PDO. Unsurprisingly, the Czech authorities rejected this interpretation of gastronomie history. They stress that the key ingredient in genuine oplatky is the local Bohemian water.
Posselťs information may well be accurate, but the question of who invented these wafers is irrelevant. Cultural artefacts rarely gestate from a single, identifiably homogenous source, least of all in central Europe. To be fair, Posselt knows this full well and has sajd as much. Neverthelcss, this spat has oiice again soured Czech-German relations - quite unlike the effect of the oplatky themselves.
This sorry story of the waffle over the wafers has revived well-worn arguments used by generations of Czechs and Germans over who arrived where first and who did what to whom. Since the fall of Communism in 1989, apologies and recriminations have been repeat-edly traded in a dispute supposedly resolved by the flawed Czech-German Declaration of 1997. Although this agreement succeeded in taking the issue off the diplomatic agenda, sporadic clashes continue overthe legacy of the "Beneš Decrees" and the proposed Centre against Expulsions in Berlin (Zentrum gegen vertreibungen - http://www.z-g-v.de). Anyone interested in disentangling this web of accusations would do well to read an insightful new Czech language study of the subject by the sociologist Václav Houžvička.
The text is less a straightforward history of the "Sudeten question" than a social scientisťs analysis of the resulting discourse. Taking as his starting point the formation of rival Czech and Bohemian German national identities in the Austrian (Hungarian) Empire during the nine-teenth century, Houžvička charts the progression of their eventual estrangement. Familiar events such as the founding of the Czechoslovak State in 1918 and the forcible inclusion of three million less than enthusiastic German-speaking citizens are given detailed coverage. So too are the pressures that fatally undermined the multi-minority Czechoslovak experiment, internationalised this dispute and led to the Munich Agreement of 1938, when the Sudetenlands were "transferreď to the Third Reich.
Less familiar is the search for a solution to the "Sudeten German question" after 1939, and Britain?s intimate involvement in the plans to "transfer" the Sudetten Germans after the war. (I must confess that here Houžvička cites my own research.) These proposals culminated in the violent "expulsion" and murder of many thousands of Germans during the bloody summer of 1945, and the more orderly (although hardly humane) ďeportations that began in January 1946.
It is at this point that Houžvička?s text really comes into its own, for he provides a clear examination of the comp!ex round of claims and counter-claims that were exchanged between Czechoslovakia and West Germany during the Manichean climate of the Cold War -including the influence the "expulsions" exerted in the 1970s on Czechoslovak dissidents, many of whom sided with the Sudeten German interpretation of the past, not least because it was diametri-cally opposed to the version promoted by the Czechoslovak Communist Party. Moreover, Houžvička was personally involved in a range of Czech-German forums and negotiations during the 1990s and these experiences lend the text a feel of authenticity. These are the views and opinions of a practitioner who has had his feet under the table and witnessed history unfolding at first hand.
One particularly pertinent point Houžvička makes is that very few English-language sources on this subject - not that there are very many of those - have been translated into Czech. Elisabeth Wiskemann?s classic 1938 text, Czechs and Germans, Louis De Jong?s Fifth Column, and Radomír Luža?s The Transfer of the Sudeten Germans all still await translation. Conversely, most of the key German sources have already been published in Czech. One hopes this situation will be rectified. It also would be extremely useful if some-one produced an English translation of Houžvička?s work.
There?s little in the history of this subject that either Czechs or Sudeten Germans can take much pride in. Both sides were complicit in the events that led to the violent removal of an entire population from its homeland. That said, the blame is not theirs alone. Czech-Sudeten German tensions unfolded on a European stage and several couutries played parts in this drama. The Great Powers agreed to the creation of Czechoslovakia in 1918, partitioned the Republic in 1938, and approved the "transfer" of the Sudeten Germans at the Potsdam Conference in 1945.
Soon after that agreement, the British Secretary of State for Foreign Affairs, Ernest Bevin, told the House of Commons what he had seen as his plane left Berlin:
It was a pathetic sight - the stream of perambulators and small vehicles of one kind or another, and the people were nearly all
women and children, with very few men at all. One could not help saying, "My God, this is the price of stupidity and war."
[House of Commons Debates, 5th Series, Vol. 414, Col. 2382, 26 October 1945.]
Somewhere in among this column of displaced persons - or one very much like it - were individuals who had once baked oplatky in Bohemia.
Martin D. Brown