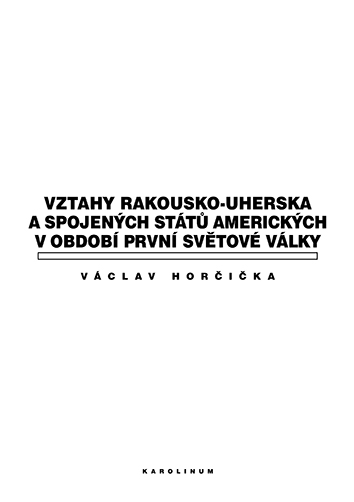 This publication provides an analysis of Austo-Hungarian-American relations during World War I. Up until the publication of this book, this topic has not been sufficiently treated in Czech or foreign historiography. There have been texts covering various circumstances of the rise of the national states in Central Europe and the role of the U.S.A. in this process, there has not, however, been a monograph, which would provide a complex analysis of the official relationships between the Hapsburg monarchy and the key power of the New World. The book addresses the development of the mutual relationships on the political as well as economic, social and humanitarian levels. It would be a grave mistake to view the relations of both powers merely with respect to the Central-European empire's disintegration at the end of the war. Its disintegration was far from being a matter of fact. Many important statesmen, including the U.S. president Wilson, were set against it for a long time; Washington was counting on the existence of Austria-Hungary until spring 1918. This book pays considerable attention to the causes and circumstances of the turn of American policy towards Central Europe as well as to the role of the exiled national representatives, particularly Czecho-Slovak and Polish.