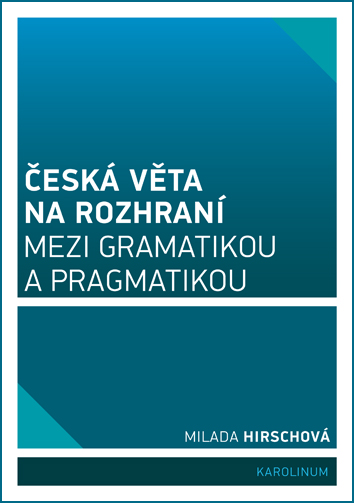 [Czech sentence on the boundary between grammar and pragmatics]

"Czech Sentence on the Boundary between Grammar and Pragmatics" focuses on phenomena arising from the employment of sentences / utterances in communication, under the influence of chiefly grammatical factors, or phenomena that are related to the standard form of syntactic units, which can however be interpreted in different manners – extent and variants of ellipsis, so-called unarticulated constituents, and the pragmatic nature of reproduced utterances. Bordering on syntax, it also covers regulatory phenomena (not only in Czech) on the final interpretation of an utterance. These mainly include the potential for typization of communicative intentions of the speaker/ producer, the potential for formal capturing of this typization through rules, and the potential for and conditions of reinterpretation and additional interpretation of the communicated units. Finally, this publication introduces the concept of logophoricity to Czech pragmalinguistics and its application as a boundary between grammar and pragmatics.