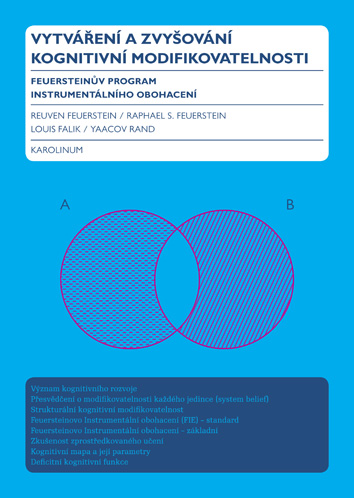 Designed by Reuven Feuerstein, professor of cognitive and educational psychology, and his associates, the Feuerstein Program of Instrumental Enrichment is one of the fundamental theoretical works describing a method by which the cognitive functions of individuals are developed and which teaches them all of the mental operations and strategies for mental activity. This expands the mental potential of individuals and their ability to learn, and thus aids them in overcoming deficits in cognitive functions found in various groups of students (mental retardation, developmental disorders of the brain, children suffering from cultural or social deprivation, the blind, etc.). This method was established more than fifty years ago; since then the method itself as well as its practical tools in the form of workbooks or instruments have undergone significant development. At the present, this method has been applied throughout the entire population without regard to age, knowledge or natural intellect, and is practiced all over the world.
Although professionals in the Czech Republic have had the possibility to read several works which were influenced by this author, the original text has not been available for Czech readers up until now. Although it may seem that it is merely a new methodology in pedagogical and psychological practice in the Czech Republic, in actuality it represents a fundamental and well developed theory without which working with instruments in practice is not possible.
First edition, reprint