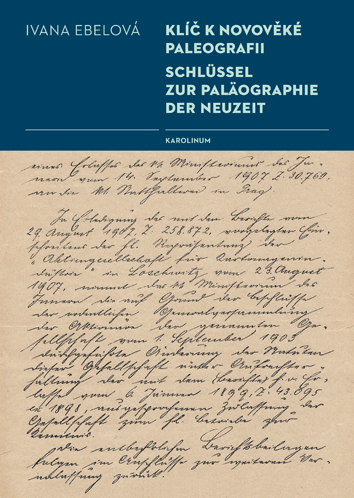 [The Key to Modern Paleography]

This handbook, "The Key to Modern Palaeography," represents a practical aid in reading Early Modern and Modern palaeographic texts (from the early 16th to the early 20th century. It focuses on two basic types of fonts, Czech and German neo-gothic, especially on their cursive forms which developed in parallel and influenced one another until the General School Act was adopted in 1774.
Given that one of the main problems in actively mastering the reading of texts from this period is the distinctive individualization of the fonts, which was caused by the development of education and knowledge of writing and its associated wide typological range of documents, the book’s main intention is to show some of the most common forms of individual letters appearing in Czech and German neo-Gothic cursive and thus illustrate the variability of graphemes based on the individual expression of the writer. In addition to these graphemes, the handbook includes 20 Czech and 20 German sample texts including palaeographic transcripts and accompanying commentary. The textbook also includes examples of fonts used in copybooks at the time as well as a list of frequently used abbreviations.