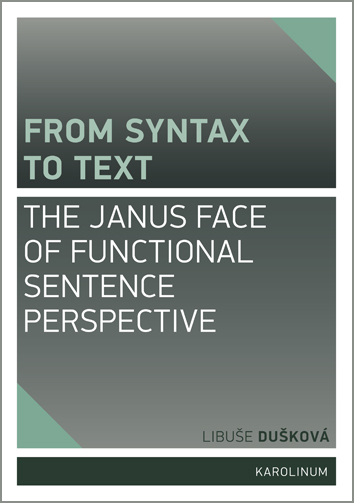 From Syntax to Text: the Janus Face of Functional Sentence Perspective

The volume presents the author’s articles written in the last fifteen years, dealing with the interaction between syntax, functional sentence perspective (information structure) and text in present-day English. It is divided into five parts, I Syntactic Constancy, II Syntax FSP Interface, III FSP and Semantics, IV Syntax, FSP, Text and V Style, which reveal the two facets of functional sentence perspective: syntactic structures as realization forms of the carriers of FSP functions, and the connection of FSP with the level of text. The first and the last two parts frame the content of the volume in treating the role of functional sentence perspective at the syntactic and the textual levels. At the former, FSP is investigated as a potential factor of syntactic divergence between English and Czech, at the latter the role of FSP is examined with respect to theme development, text build-up and style. The points discussed in the other parts concern, among others, the hierarchical relationship between syntax and FSP, the question of potentiality in FSP structure, different realization forms of FSP structure and FSP functions, general and specific questions of word order, with major attention paid to the role of semantics.