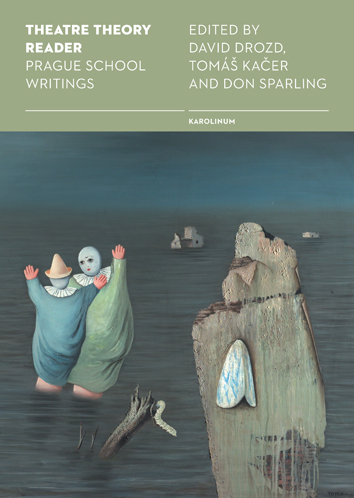 This publication opens with an Introduction and a short commentary on editorial issues entitled Editors’ Choices and Guidelines. The main text is divided into two sections. The first major part, which includes the reader itself, represents the first comprehensive and critical anthology of texts reflecting on the development of Prague School’s theatre theory from its beginnings associated with the aesthetics of Otakar Zich. The majority of the thirty-eight texts presented in this section are from the 1930s and early 1940s, the period when the Prague Linguistic Circle was most active, functioning as a theoretical laboratory as well as a focal point for scholars, artists and intellectuals. A number of the essays presented here date from the postwar period but retain their original pre-war momentum. The second section, an afterword entitled “Prague School’s Theatre Theory and Its Contexts,” was written by Pavel Drábek and his collaborators. It describes the background of the emergence of the Prague School, aiming to facilitate a better and deeper understanding of these texts.
By its very nature, this book is not meant to be read as though it were a novel, from the first word to the last in the given order. Instead, the reader is invited to explore those parts that are relevant for him or her. Just as the Prague School theorists viewed theory as a toolbox of approaches to theatre analysis, the presented anthology should be considered to be a toolbox of possibilities. To facilitate this, the eight sections of the anthology cover the most common areas of performance analysis.

The anthology is organized thematically and structurally rather than chronologically, focusing on issues and themes in the study of the theatre as an art form and as artistic practice.

This is precisely the book I have been looking out for ever since working at my Das Drama. Theorie und Analyse (1977; The Theory and Analysis of Drama, 1988), and discovering from a few specimens the incisive usefulness and importance of Prague School theatre semiotics. There is everything one could possibly wish for in this monumental Theatre Theory Reader: Prague School Writings: all the by now canonical texts and many others presented for the first time in English, arranged in a systematic order which fully renders the sense of the scope and development of Czech theatre semiotics, and all of them in highly competent translations aware of the terminological complexities at stake and supported by helpful annotations.

With such a rich harvest garnered, this anthology of Prague School Writings is bound to become nationally as well as internationally a prime work of reference and give to them a second lease of life in the 21st century.


Modern theatre theory, no matter what its orientation, can trace its roots back to the structuralist and semiotic explorations of the Prague School in the early twentieth century. This comprehensive and informed overview is therefore most welcome in understanding the course and development of that theoretical tradition. It is not, however, of purely historical interest, important as that is. Whether they use the
terminology of the Prague School or evoke the names of its ontributors, analysts of theatre and performance today still find the strategies and articulations of those pioneers of ongoing relevance. This collection thus provides an important double service, providing contemporary theatre scholars with a clearer idea of where they have come from and an inspiration for where they may be going.


The Prague School and the Czech structuralism have had a considerable impact on the development of semiotic studies and theatre studies at large in the 1960s and 70s. But this has been quickly forgotten and with the rise of poststructuralism and deconstruction in the 80s and 90s, they were not only neglected, but also unjustly disregarded or even forgotten. This is why the Theatre Theory Reader: Prague School Writings is a very welcome book which comes at the right moment, when postmodernism, poststructuralism and postdramatic theatre seem to have lost their momentum, as if the requirements of today’s quest for a new way of living and of making business had become so strong that we must go back to the basics. Structuralism and a critique of ideology are now back, at least as a sign to not give up thinking and theorizing in a world which has become self-centred and mad.

The afterword by Pavel Drábek, Martin Bernátek, Andrea Jochmanová and Eva Šlaisová is a sort of book within the book, as it neatly puts in perspective all the important names and theories of the Prague School. It does this in a very user-friendly manner, where complex theories are summarized in a clear, yet precise, introduction. This makes the reading of the different chapters easier and immediately connected to our contemporary way of thinking

I think it is a great idea not to group the articles according to the different authors but following a systematic that covers as many aspects of theatre as possible. This way, it becomes quite clear that the theories of the so-called Prague or Czech structuralists and semioticians were able to apply their theories when discussing most diverging questions related to theatre.

The choice of texts is excellent. It makes more than clear that these theories are not outdated, do not only have historical value and are interesting with regard to the history of ideas only. Rather, it becomes evident that they are highly relevant in the context of discussions led today.