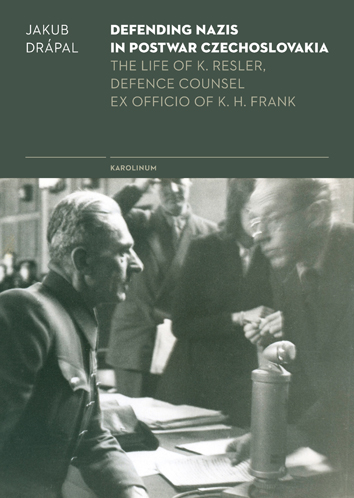 This book tells the story of life of Kamill Resler, attorney who defended the most prominent Nazi tried in post-war Czechoslovakia: Karl Hermann Frank. Important cases that preceded Frank´s trial are presented as well as life events that influenced Resler and his legal carrier. Defences of other Nazi criminals following Frank´s trial are discussed as well as his private life and the end of his life in the communist regime.

“The book is timeless and every lawyer should read it. On a background of individual cases it attractively presents that… there is a set of ethical rules we must follow.”
Pavel Zeman, Supreme Prosecutor of the Czech Republic

“Life of Kamill Resler might serve as a perfect example for upcoming generation of lawyers.”
Stanislav Balík, former judge of the Constitutional Court of the Czech Republic

“This publication will be sought not only by attorney, but it will be also thrilling reading for anyone who is interested in recent history”
Vojtěch Lažanský, attorney