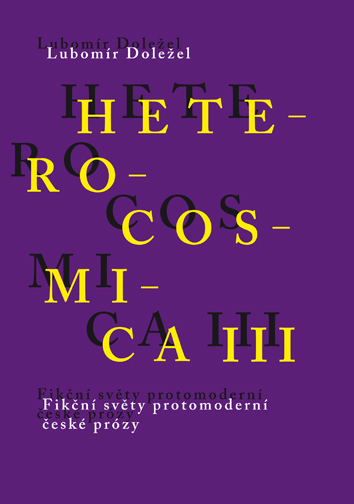 In 1998 in the American city of Baltimore, Lubomír Doležel, student of Professor Havránek and a contemporary follower of Czech structuralism, published his work formulating the principles of narrative semantics and an introduction to the theory of fictitious worlds entitled Heterocosmica. Fiction and Possible Worlds, whose Czech translation was published by Karolinum Press in 2003. Ten years later, he followed up with Heterocosmica II. Fictitious Worlds of Post-Modern Czech Fiction (Karolinum Press 2014), in which developed his theories on contemporary Czech fiction while leaving out the "intermediary English stage.” Both the trilogy and Professor Doležel’s (1922–2017) creative journey concluded with Heterocosmica III. Fictitious Worlds of Proto-Modern Czech Fiction (Karolinum Press 2018, published posthumously). He symbolically returns to the roots of Czech modernism and post-modernism, to the literature of the tumultuous period of the turn of 19th and 20th centuries, to the literary developments that he called "proto-modernism.” Doležel’s contribution to the development of narrative studies and to the theory of fictitious worlds earned him world-wide respect and recognition.