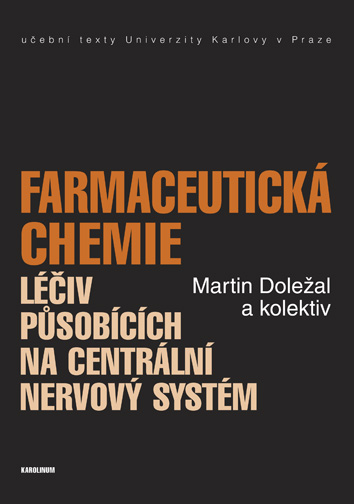 The last edition of a similar text, written by a group of authors from the Pharmaceutical Faculty in Hradec Králové, Pharmaceutical Chemistry of Drugs Affecting Central Nervous System, was published as early as in 1993. Over the past twenty years, however, there have been significant differences in most groups of psychopharmaceutical agents, and so the authors tried to describe new findings, capture trends in the development of pharmacotherapeutical groups and, primarily, to generalize them through the study of dependences between the chemical structure and the effects of the drugs.
They emphasized chemical formulas, which were modified to clearly show the logical relations between individual drugs, or their resemblance to the target neurotransmitters. At the end of each chapter, there is a brief overview of the drugs used in medical practices, along with their INN names, pharmacopoeial (Czech Pharmacopoeia 2009 and addenda), chemical (IUPAC) and, last but not least, also examples of protected names of medical substances (registered in the Czech Republic prior to April 2013). This monograph is intended not only for students of pharmaceutical faculties, but it may be used as a handbook for pharmacists and other experts dealing with modern pharmaceuticals.