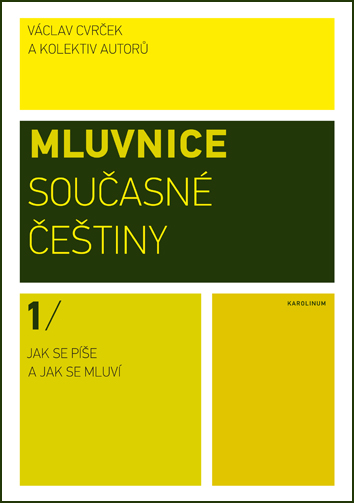 [Grammar of contemporary Czech 1. The way we write and speak]

Mluvnice současné češtiny I. (Grammar of contemporary Czech 1), written by scholars working in various departments of Charles University, is a new attempt, after a delay of almost fifteen years, to present a concise and understandable description of Czech. The Grammar is published in two volumes, with the first one covering phonetics, vocabulary, word formation, morphology, stylistics and orthography, while the second volume will focus on syntax. It is the very first grammar book focusing on the difference between spoken and written Czech, based on data from large databases in the Czech National Corpus (www.korpus.cz). This effort resulted in a modern publication based on extensive material, which does not attempt to present what the language should look like but rather how we really speak and write. The reader can thus gain an idea about what means of expression are common and suitable in different situations as well as those that are unusual or not preferred in the given context.
Compared to the first edition, the second edition of Mluvnice současné češtiny does not differ considerably, with the most significant change being a new graphical layout. In addition to this, several minor corrections have been made to the original text, mainly corrections of certain formulations.