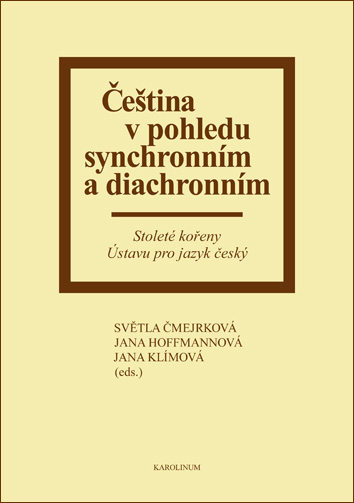 The year 2011 was marked by the 100th anniversary since the foundation of the Office of the Czech Dictionary, an institution which became an immediate predecessor of today’'s Institute of the Czech Language (ICL), Academy of Sciences of the Czech Republic. This book contains papers devoted to this anniversary, which partly go back to the past: to the history of the Czech language, Czech linguistic studies as well as the history of linguistic research at the ICL. Many other papers, however, provide a representative view of contemporary research in Czech linguistics. They inform about different types of dictionaries (etymological, phraseological, valency and others) and about the work on them using modern lexicographic tools, about the gradual making the old Czech vocabulary available to the public, about electronic preparation of old Czech texts for publishing and others. They describe work on new grammar books of the Czech language, which would be impossible to compile without the use of corpus data. Attention is paid to the style of the written and spoken languages, and of media and electronic discourse. They also commemorate the completion of long-term dialogical research in the form of the Czech Language Atlas, the development of the Czech onomastic school or how the present-day linguists focusing on language culture newly interpret the classical legacy of the Prague School (notions of norm and codification, for example).