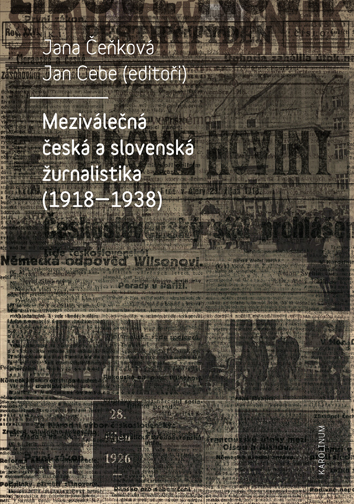 To this day, the period between the two world wars in Czechoslovakia is associated with the idea of a flourishing democracy, economy and culture. This idealistic view conflicts with a number of problematic phenomena which accompanied the period of the First Republic, not to mention the period after Munich 1938. Even so, during this twenty-year period Czechoslovakia proved that it was in many respects the equal of democratic states with a longer tradition. Without a doubt, culture was one of these areas. Czechoslovakia became a republic of readers and its fascination with the printed word pervaded all classes of the society. This interest also included newspapers and magazines. Anyone who wanted to excel and be noticed in his field, either as an interesting person or the author of texts, had to be present in the newspapers and magazines. The diversity of individual periodicals offering their specific view of politics, economics, cultural areas, sport and lifestyle is surprising from today’s perspective. The media environment of the 1920s and 1930s however did not belong only to the press; film was already playing its informational and entertainment role and after a somewhat timid start, radio began to rapidly expand as well.
These topics are addressed by the Czech and Slovak authors of this monograph, including Jan Cebe, Jana Čeňková, Jan Halada, Světlana Hlavčáková, Marta Chladová, Magdalena Prajerová, Alena Lábová, Martin Lokšík, Karol Lovaš, Josef Maršík, Petr Orság, Barbora Osvaldová, Peter Sasák, Danuša Serafínová, Jaroslav Slanec and Martin Štoll.