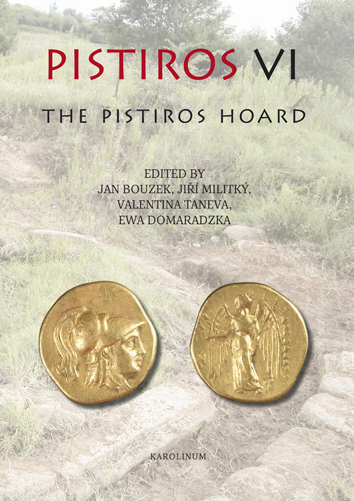 The VIth volume of the series of results of excavations and surveys of a Greek emporium in inland Thrace is devoted to the most important find by the Charles University team of the joint Bulgaro-Czech-British project, a hoard consisting of 549 silver and three gold coins, issued by Diadochi of Alexander the Great, Philip III, Lysimachus, Cassander, Demetrius Poliorcetes and Seleucus I Nicator. It was closed soon after the death of Lysimachus at Corupedium in 281 and hidden at the time of imminent danger of sack of the city destroyed by Celtic invasion in 279 B.C. It probably belonged to mercenary serving in Lysimachus’ army; the astragal, accompanying the coins in the same vessel, suggests that he was a gambler. The hoard is unique as being uncovered during regular archaeological excavation, what enabled to record precisely the situation of its deposition, and it contained types of coins, which were imitated by the first coinage of Central European Celts, issued just after the return of part of their army in the area of Bohemia.