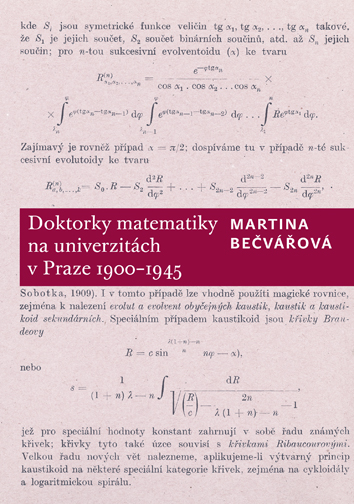 [Female Doctors of Mathematics at Universities in Prague 1900-1945]

This monograph is based on a long-term study of the development of the mathematical community in the Czech Lands. It discusses the complicated yet inspiring life stories of twelve women who defended their doctoral thesis in mathematics, both successfully and unsuccessfully, at a university faculty in Prague in the time period between between 1900 and 1945. Although it was not common for women to engage in specialized work in mathematics, these women managed to do so at a time when female mathematicians were viewed with a certain distrust, for they could become highly visible competition for male mathematicians, of course only if they had the desire to do so and exhibited greater courage to face the ingrained social stereotypes. Elaborate studies show from which social environments these women originally came, the environments into which they married, their cultural, intellectual and material backgrounds, how they were motivated by, influenced by, and cultivated by family and social events, how they lived, what their interests were, what problems they faced, what was their relationship to family, homeland, faith, politics, and what complications they faced in life. Basic details on their closest family members are included, and the study is complemented by reproductions of historical documents and photographs, allowing a closer and more detailed look at the subject.