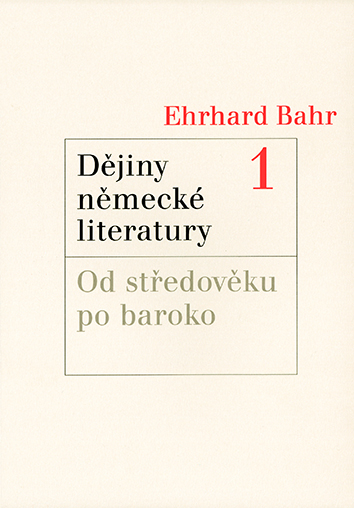 [A History of German Literature, Part I]

Bahr's three-volume "History of German Literature", covering the period from the early Middle Ages to the present, belongs among classical literary-history works. It was first published in the late 1980s as a condensed overview of literature and literary science for American students. Mainly thanks to its high user value in the U.S., it became popular also among the students of German studies and non-academic audience in Germany. The translation into Czech is based on an updated and revised edition. Each period of literary history is treated in a separate chapter by an expert on the particular period. The basis for the explanations is historical interpretation of representative works. This work on literary history aims to point out the continuity and transformation of literary forms and genres, but also to study the influence of literature in society. This approach is also reflected in the selective bibliographies of individual writers, including the recommended literature for those interested in further study. The first volume contains German literary history from the early Middle Ages to the baroque.