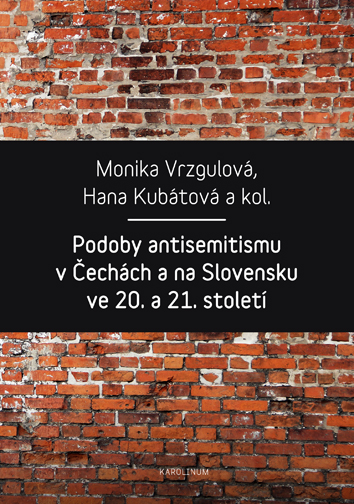 This group monograph, addressing the forms of anti-Semitism in the Czech Lands and in Slovakia, analyzes the discoursive and visual forms of the image of Jews in the Czech and Slovak majority population. The texts focus on the formation of just what is a "Jew” or "Jewish” in the course of the 20th and 21st centuries and on the formation of the majority population’s image in relation to this "foreign” image. The scholars analyze the issues of continuity and transformation of these mirroring images and examine the relation of identity and (political) power. Using the examples of the Protectorate of Bohemia and Moravia, the Nazi Slovak Republic, Communist Czechoslovakia as well as the contemporary situation, the scholars convincingly demonstrate that anti-Semitism is not related to a true or alleged enemy, but to (self-)legitimation constructs. This book, which builds on excerpts from published periodicals, oral biographical interviews, memoires and archived documents, is suitable for the experts and teachers as well as anyone interested in the phenomenon of anti-Semitism, its manifestations and developments in the 20th century and at the present time.

This is a very informative historical study about the typology and manifestations of anti-Semitism during the 20th and 21st centuries in the Czech lands and Slovakia. The main focus is on (1) the continuities, discontinuties and transformations of the various forms of anti-Semitism, (2) questions relating to the evolution of Jewish ethno-religious identity and its relationship to Czech and Slovak national identies as well as political power, (3) the perspectives on Jews and anti-Semitism of both the Jewish minority and the general Czech and Slovak population, (4) the forms of collaboration and complicity of ordinary Czechs and Slovaks during the World War II Nazi genocide against the Jews, and (5) the continuity of processes and procedures behind the construction of a Jewish enemy - the bedrock of modern form of antisemitism. The monograph also addresses issues related to collective and individual memories. As the editors suggest in the Introduction and English summary, the book is not only about the Jews and the various forms of prejudice and discrimination they have been subjected to throughout history, but also about Czech and Slovak societies as such, from whose social structures anti-Semitism in all its manifestations has emanated.
The focus of the book outlined above raises new questions about the endurance of anti- Semitism under different political regimes and socio-historical contexts. Examining 20th and 21st century anti-Semitism from the perspectives of both the Jewish minority and the general population enables authors of the individual chapters to raise new questions, and provide new evidence about troubling questions about forms of collaboration and complicity of the general Czech and Slovak population in anti-Semitism throughout modern Czech and Slovak histories, but especially during World War II. By focusing both on the masses and the cultural and political elites, the authors raise questions which were previously considred taboo in Czech and Slovak historical discourse.
Both general theoretical frameworks and methodologies are highly appropriate. The first chapter provides a very good overview of the various definitions of anti-Semitism, and in the following chapters, the individual authors make very good use of the typology. The interdisciplinary character of the monograph ensures a variety of methodologies employed, from archival research through content analysis of newspapers and satirical magazines to oral and visual histories. The monograph has greatly benefitted from being based on papers presented at a scholarly conference. While many collective monographs contain individual contributions of uneven quality, this particular pitfall of collaborative work is completely avoided in this monograph. The authors exhibit familiarity with each others' perspectives and data, and build on them. Thus the book covers a broad range of issues no individual author could cover, yet it reads as a well written, unified book.