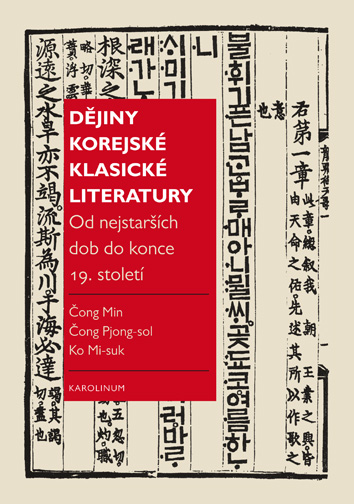 [A History of Korean Classical Literature. From Earliest Times to the End of the 19th Century]

This publication is the first text written by contemporary literary scientists of the Korean Republic and translated from Korean into Czech. According to its authors, it is intended primarily for a wider circle of non-specialist readers interested in the subject or beginning students of Korean studies. It presents the main development of Korean classical literature from myths, through a range of the different genres (poetry, song forms, fiction, phansori, and partly also literary criticism). The publication presents new views on the character of the Korean literature in classical Chinese (which is an inseparable segment of the history of Korean literature in the course of its development) as well as an analysis of works written in Korean after the establishment of hangul, Korean sound writing system, in the 15th century.
The translator (V. Pucek) supplemented the text with numerous notes for easier understanding of the historical development, religion and Korean realia and with an afterword entitled "The Path to Korean Classical Literature in Czech Korean Studies." The afterword contains an overview of existing translations of Korean works into Czech and Slovak and brief references to Czech translations from other Far-East languages for comparison with the literatures of neighbouring countries, among other things. The book contains numerous pictures and is accompanied by a glossary.