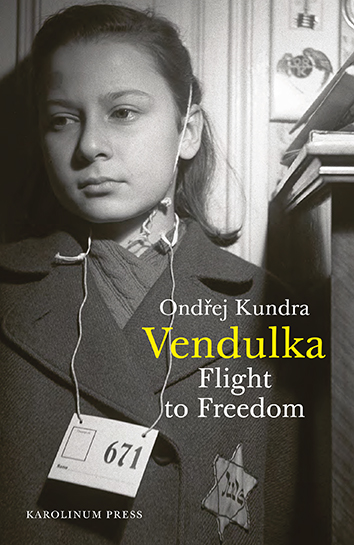 Famed Czech Avant-garde photographer Jan Lukas snapped an offhand portrait of twelve-year-old Vendulka Vogl in March 1943. A friend of the Vogls, Lukas was saying goodbye to the family, who were soon to leave Prague for a concentration camp. The photograph almost didn’t see the light of day—Lukas knew that if the Nazis found it on him, he could wind up in the camps as well—but the image was eventually developed and came to symbolize the Holocaust and humanize its victims. Seventy years after this famous picture was taken, investigative journalist Ondřej Kundra discovered that, despite all odds, Vendulka Vogl had survived the camps of Terezín, Auschwitz, and Christianstadt, and was in fact still alive and living in the United States. Kundra persuaded her to tell the remarkable story surrounding the photograph: her survival, her later decision to flee the Communist regime for America, and how she later reconnected with Jan Lukas, maintaining a lifelong friendship.
Vogl’s thrillingly moving story, Kundra’s sharp and engaging writing, and Lukas’s striking photography all combine to make Vendulka an inspiring investigation into the horrors of totalitarianism and the redemptive beauty of friendship.

“Through one legendary, tragic photograph, as through a prism, Kundra skillfully captures three great stories: the Holocaust, which feels like you hear about it for the first time as it is told through the eyes of a child; totalitarian Communism; and, what makes this book utterly original, the history of 20th century photography. It’s this multi-dimensional approach that makes this more than just an excellent piece of reporting and history, but a narrative achievement in itself that would make Kundra’s compatriot Kundera proud.”
– Peter Pomerantsev, journalist and author of Nothing Is True and Everything Is Possible

“Ondřej Kundra’s book is a must read for anyone interested in the Holocaust. He investigates and illuminates a fascinating piece of hidden history— the story behind an extraordinary and poignant photograph which exemplifies the tragedy that engulfed millions.”
– Edward Lucas, vice-president of the Center for European Policy Analysis and columnist for The Times

“Vendulka is a unique book of photographs and text, inspired by a haunting portrait of 12-year-old Vendulka Vogl, a Jewish girl in Prague on the eve of her family’s deportation in 1943. The photo was taken by a family friend, the young non-Jewish photojournalist Jan Lukas, who hid the negative for the duration of World War II as he pursued his career. Concise and unsentimental, Vendulka is a document as well as a visual and literary treat.”
– Helen Epstein, journalist and author of Children of the Holocaust

“In this elegant short book, Ondřej Kundra has told the story of Czechoslovakia– really the story of Europe – through a single life. Beginning with a photograph of a Czech girl named Vendulka, the story follows her to a Nazi concentration camp, through the Communist occupation of her country and eventually to the US. Years later, she is reunited with the photographer, and comes to terms with her life. A lovely story, beautifully told.”
– Anne Applebaum, columnist for The Atlantic, professor of practice at the London School of Economics, and author of Twilight of Democracy: the Seductive Lure of Authoritarianism