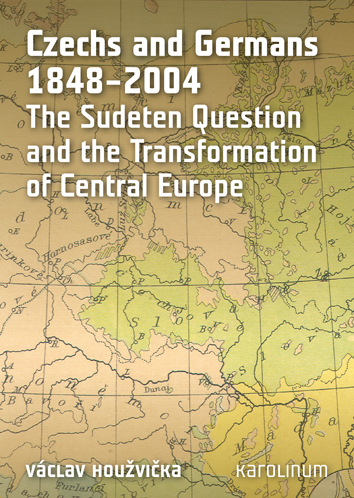 The Sudeten Question and the Transformation of Central Europe

Václav Houžvička describes the development of Czech-German national disputes from the mid-19th century, through the establishment of Czechoslovak Republic in 1981, up to the beginning of the 21st century. He pays special attention to the tragic end of mutual co-existence between 1938 and 1945 and the subsequent development of differing Czech and German reflection of the reasons for the displacement of Germans after 1945 from the Czechoslovak territory in the second half of the 20th century. The exposition of Czech, German and Sudeten German concepts is presented in a thorough and comprehensive manner in the international social and economic context of the 20th century. The text is based on the 2005 Czech edition, which was revised and adapted for English readers and which also contains a supplement with numerous illustrations, documents and maps.

7 The Genesis of the Transfer of the Sudeten Germans
A Century of Transfers of Populations
The Sudeten Germans and the Protectorate
The Sudetenland Model Reichsgau
The London Government in Exile and the Home Resistance
Edvard Beneš and British Plans
Transfer or Expulsion?
Cutting the Gordian Knot

11 Memory as Part of the Present
Cautious Friendship
The Historical Roots of Attitudes to Germany
Fears of Germany - A Reduced State Syndrome?
Germany Unified and Emancipated
The Return of Mitteleuropa?
12 Germany and the Sudeten German Question in the Eyes of Public Opinion
13 The Czech-German Relationship between Past and Future
Instead of a conclusion

The issue reflected in the title of this volume is deeply rooted in the history of the Czech lands. It became particularly controversial in the aftermath of WW I, when the German-speaking population, chiefly resident in the Sudeten lands of the Bohemian (Czech) territories of the former Habsburg empire, had to choose to become part of Germany or the new Czechoslovakia. The Nazis subsequently exploited these tensions and destroyed the new state. After WW II, Germans were forcibly expelled from the Czech lands. Following the end of the Cold War, these Germans have made efforts to recover what they regard as their lost territories. Houžvička (Univ. of Ústí nad Labem and Institute of Sociology, Czech Academy of Sciences) carefully traces these historical and current developments in this scholarly and relatively dispassionate study (effectively translated from the Czech original). The author's main focus in the volume's last chapters is to examine renewed demands from Sudeten Germans and the challenges these present in Central Europe. His helpful conclusion identifies, point-by-point, issues and problems. Well-chosen illustrations, maps, texts of nine categories of documents, and an excellent bibliography enhance the volume.

Václav Houžvička sheds light on topics associated with central European transitional historical periods and developments too often shrouded in convoluted controversy. His focus on “Mitteleuropa” as a geographical region encompassing contradictory political agendas and territories offers readers a coherent perspective about the Sudeten people cast as perpetual others in a landscape dominated by empires, nations, and singular or enfranchised factions. The book makes an immense contribution to the fields of continental History, Slavic Studies, and Political Science, whose readership should certainly consult it.
Notably the book stands as the most recent and thorough source of information on the Czech-German people, known as “the Sudeten” (Timothy Burcher 1996, Radomir Luža 1964). Houžvička produced this work through fifteen years of research, involving multiple research endeavors, communications with colleagues, and direct observation (10). The author maintains the historical scope and tone of past work focusing on the Sudeten and includes unique insights into the Sudeten experience during the Cold War. Other contributions made include analytical delineation distinguishing the Pan-German political orientation, as represented by the modern German nation-state, from the multi-ethnic orientation represented by the Habsburg dynasty. Houžvička makes a contribution with the conceptual framework, bearing theoretical significance and explanatory potential in conjunction with his disciplinary contribution to history.
The book contributes to the discourse on the Sudeten ethnic experience, including reflections on the transition from dictatorships to democratic processes and the moral weight of the quadruple cataclysms of Nazism, World Wars, communism, and the Holocaust. The author challenges any smug attempt to gloss over real historical facts, asking, “... are efforts to ‘get over’ history really having the expected positive and purgative effect for current cooperation between Germans and Czechs and Poles?” (11) The author reminds us in this way that forgetting the past will endanger the public to reemerging conflict and disaster.
Endemic to the perspective presented in the work lays the idea that emancipation from political domination by elites necessitates ethnic consciousness among the Sudeten and an ironic flirtation with Germanization among them (22). This described irony likewise emerges from Houžvicka’s account of Austrian authoritarianism, increasingly association with centralization, contained in the nonetheless multiethnic history of decentralized Habsburg Austria (24). Rooted in an authentic and detailed understanding of historical developments, Houžvička explains: “The growing ethnic tension between Czechs and Germans involved revolt against the liberal Austrian state and turned against the Jews, the most conspicuous and vulnerable of the groups that had been benefiting from liberal Constitutionalism” (19). The author further explicates the seemingly perplexing intricacies about Sudeten exceptionalism: “In this context we can see the position of the Sudeten German as one in which their own frame of history became the place where the Austrian and Pan-German frames of history overlapped and interlocked, and where action and attitudes in each of these frames was automatically influenced and affected by action and attitudes in the others” (84).
Despite evident strengths, Czech and Germans 1848–2004 remains verbose and so detail-laden that only the most seriously sworn scholars and students of history will choose to read it without any reservation. For this reason, the book’s notes, appendices, maps, graphs, and illustrations help any reader navigate its overwhelming quantity of information. Despite the way it might seem off-putting to the majority of readers, however, it ultimately contributes to an understanding of Sudeten identity, the history of central Europe, and world history in a profound way.
Because the author aligns Czech revivalist thought with Enlightenment thought originating from the French Revolution, the book is a dialectically sound, optimistic, and theoretically engaged text. Despite this philosophical rigor, Czech and Germans 1848-2004 does not capitulate into redundancy or rhetoric. Rather, this work delivers substantive historical material about the Sudeten in their ethnic, geographic, and political contexts. The responsibility the work has in the advancement of ethnic exceptionalism as an explanatory framework remains a question for scholars and students of all said disciplines, as well as for those in any related area of cultural studies or anthropology.