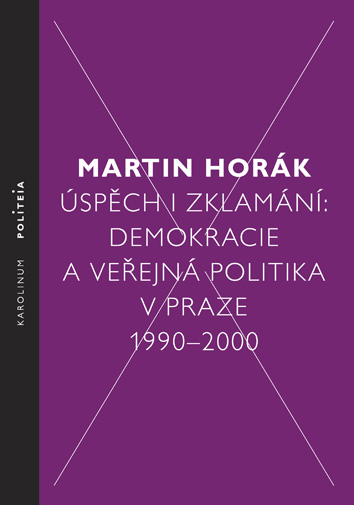 [Success and Disappointment: Democracy and Public Policy in Prague 1990 - 2000]

In this book, the author, a Canadian political scientist of Czech origin, takes on the mystery of the poor performance of public administration in present-day Prague. In 1990, democratically elected local administration was restored in the city. The following years were however marked by the development of a non-transparent administration, problematic decisions and public disillusionment, all phenomena with which Prague is still struggling today. Through an analysis of the political decisions made in the 1990s in the areas of development of transport infrastructure and the development of the historic core of the city, Horák arrives at the roots of the current state. Immediately after the fall of communism, the new politicians in Prague, faced with an unstable political environment, tended towards simple and short-term solutions to key political problems. The problematic political structures and norms arising from the interim period were thus embedded in Prague, and formed new permanent interests which were then difficult to eliminate.

In the Czech context, this book is distinguished by its completely new approach, based on detailed case studies, and contributes to an overall understanding of the dynamics and issues of democratic development in post-communist states.