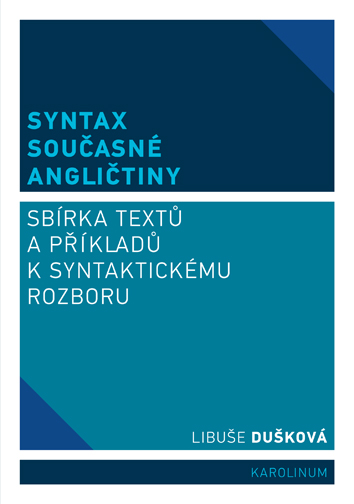 [Syntax of Contemporary English. A Collection of Texts and Examples for Syntactic Analysis]

The first part of this book, A Collection of Texts and Examples for Syntactic Analysis, contains both short and longer texts, while the second part contains individual sentences intended for discussion as part of seminars in contemporary English. Individual types of sentences in the second part are arranged according to the chapters in the book Mluvnice současné angličtiny na pozadí češtiny (Grammar of Contemporary English against the Background of Czech). The texts were taken from English fiction. Unlike the second part, for didactic reasons texts in the first part are intended as supplementary material in which specific phenomena have not been classified. The short texts have been organized to follow the phenomena discussed in the second section. The book contains a Czech-English glossary of selected grammatical terminology.