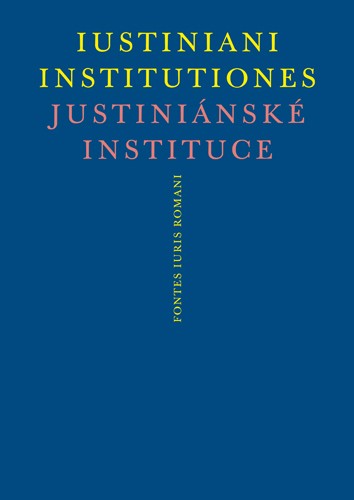 A translation of the law textbook of the East-Roman Emperor Justinian from the 6th century AD, which was in use until the 18th century. Institutions, which focus primarily on Roman private law, also contain information on penal law as well as general legal principles, and present the intellectual richness of the legacy of the Roman legal science.

The intellectual richness of Roman law has influenced innumerable generations of lawyers. It provided information and inspiration to judges, attorneys-in-law as well as legislators. Traditionally it has also provided the first more intimate contact with law to students of law faculties. It is the systematic character and elaboration of the body of law of Ancient Rome that allows the future jurists to penetrate the byways of legal science, understand how law functions in its entirety and first of all to learn how to think in legal terms.
The information on Roman law, presented here not only for students, consist of an extract from laws, specialized documents by Roman lawyers or sources of literary character. These sources and many others, such as epigraphic monuments or papyrus or numismatic artifacts, contain relevant information related to this body of law. Only seldom, however do we have a chance to study a Roman legal text preserved in a complete version, without any gaps. One of these texts is Institutiones seu Elementa, which is the complete name of the textbook by the East-Roman Emperor Justinian I from 533 A.D., whose translation we present to the kind reader.
We can, along with students of law from the end of the era of Ancient Rome, gradually become acquainted with the different areas of Roman private law, admire the interconnectedness of its institutes as well as the formulation ability of its authors. Although Justinian Institutions were written as late as at the beginning of the 6th century A.D., they were intended from the very beginning as a legal textbook, and as such they contain much data on the preceding periods. And so we can also read them as guides to the life in Ancient Rome, which presents authentic everyday life of the inhabitants of this ancient state.